I wrote to one of my WNV groups and described how I felt with all the people, noise and movement from the parade. I got 16 responses saying that WNV left them feelig the same way. And then a couple of people said a curious thing. They feel like WNV is a lot like being autistic. Yup! The mild end of the spectrum….but very much the same. I have talked about Asperger’s a few times. Every sensory issue I had as a kid…and then some…has come back after WNV. I wonder how many times I have used the word “overwhelmed” since the stupid mosquito bit me? We all have a strange sort of anxiety we never felt before.

In my MG support groups, the subject of pain often comes up. It used to be widely believed….by doctors….that people with MG don’t feel pain. That always irks me. Finally the American Association of Electrodiagnostic Medicine surveyed actual MG patients and 50% said they had pain due to MG. Well, duh! When I struggle to breathe, my ribs hurt. When I am too weak to hold up my head, my neck hurts. When my eyes droop and I have double vision, I get very nauseous, my eyes hurt and I get a headache. When my arms and legs feel like someone attached lead weights, it hurts to lift up my hands and feet. If the muscles aren’t working right…they are weak….the weakness causes pain. BIG DUH!!!!!! So tired of idiot neuros who tell people they don’t have MG because they have pain! Hardly a week goes by that some woman is undiagnosed because of that. Grrrrrrrrrr…….of course, it’s always women 😦

And….one of the TV stations asked the question….what happens to all those parade floats? Some people said a part of them are recycled. One guy was very proud to say it was only meant to be used once and was going to the dump. When people have enough food, shelter, etc, they usually have no clue what the lives of the less fortunate are like. Makes me sick that all those hours and all that money…..most often raised by church wards or stakes, goes to stuff like this. I bet most kids would rather see real pioneer wagons, lots of horses and the simpler, older things. At least for me, I am tired of being glitzed out. Authentic things are more interesting. What if all those parts of the LDS church put that much money and effort into good food for the poor, dental care, medical care and other true and desperate needs in the community?

An article in the SL Trib says “For those who make floats, the parade is the culmination of more than eight months of work, Smith said. Stakes in The Church of Jesus Christ of Latter-day Saints are given a parade theme in October. This year, it was “Forging a New Frontier.” Then they draw up a plan and assemble a building and decorating team. In January, once they receive a float base, they spend the next four to six months completing it.” Geeze, reading that made me even more heart-sick 😦

I am glad it’s not just me who sees the whole thing as nuts. I like this story. Pioneer Day should reflect all of Utah’s people

Yes! What a waste of time! (And BS!) How about a real service project that actually HELPS others??? People will feel much more fulfilled when they do something useful. Deseret News story…Creating Days of ’47 parade float is ‘more about building people’

I am deeply disappointed in humans. There are real gems out there, though. Some people do good and help others. Imagine a world where we spent much of our life caring about others! I see so many people hurting financially, socially, physically and mentally.

The other day I was coming home from the grocery store. For the bazillionth time, I almost got hit at an intersection by a driver bent over their smart phone. I had started to cry behind my sunglasses. Some random man….probably homeless…..smiled with the biggest grin, said hi and complimented me on something or other. His smile made the whole world better at that moment 🙂 It doesn’t take money to make another person’s day. It just takes caring. If you have the means to help out temporally, so much the better.

At least Pie ’n’ Beer Day is honest about what it’s all about. Olive does not approve of pie and beer. She would like some sour cream, though. 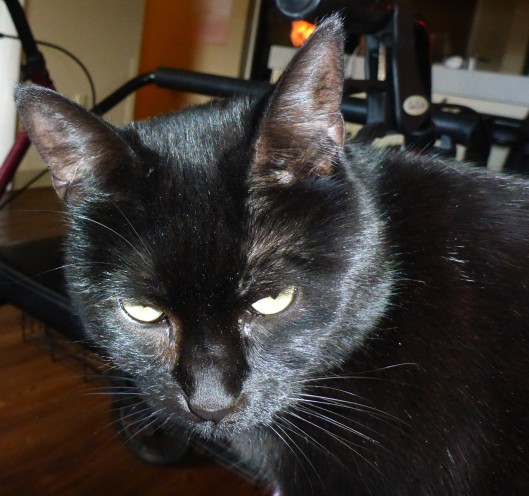 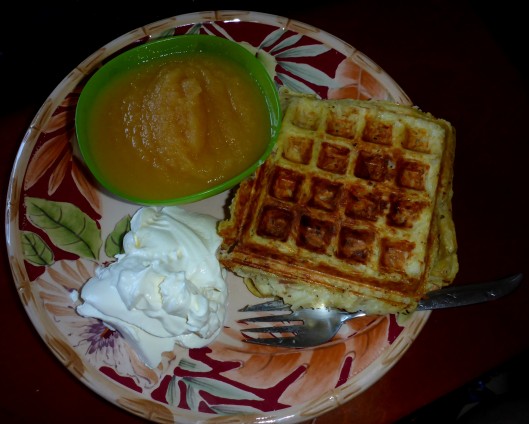 Mom made potato pancakes into potato waffles. One potato, part of an onion….put through the food processor. Add an egg, salt and pepper. Cook in waffle iron. Serve with sour cream and applesauce. 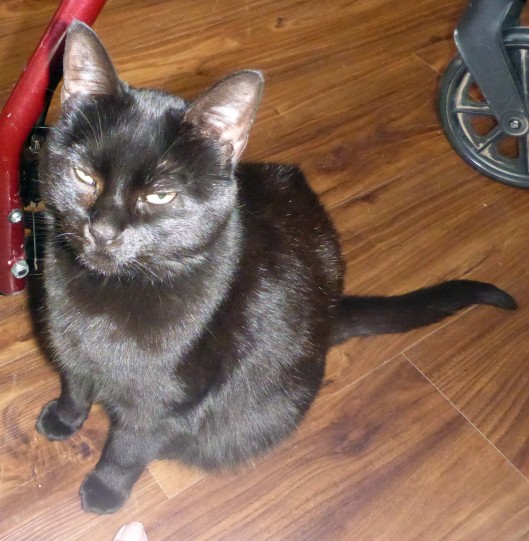 Seriously! Are you ignoring me! 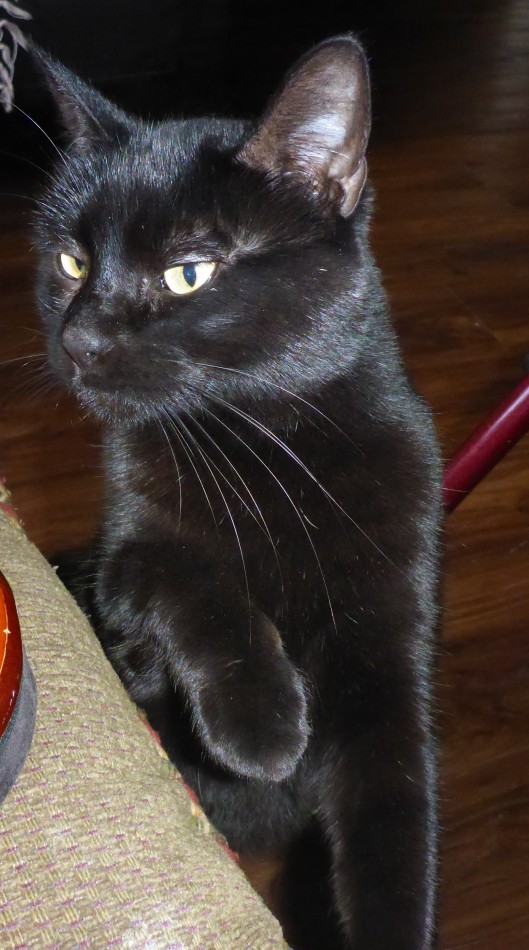 I am cute and adorable! You cannot resist me!

Fine! I know there are cat treats in the suitcase. 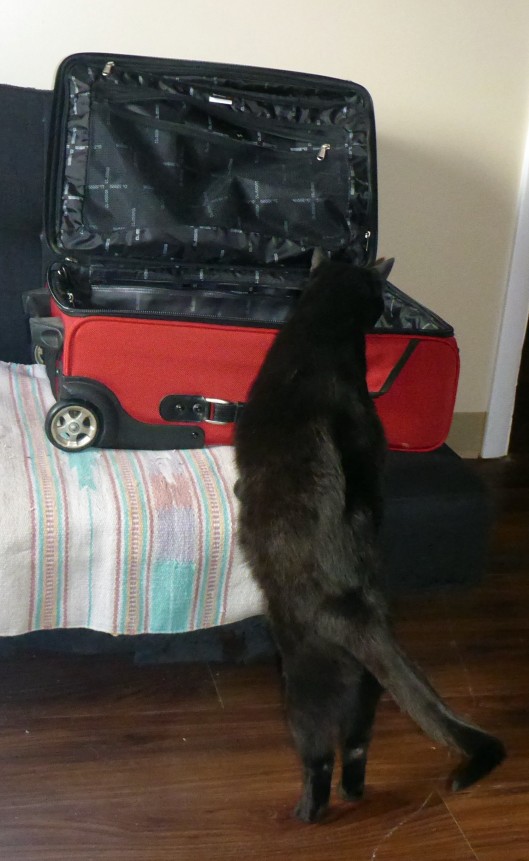 While you are blogging, I think I will check this out.

Aha! I see a bag of cat treats! 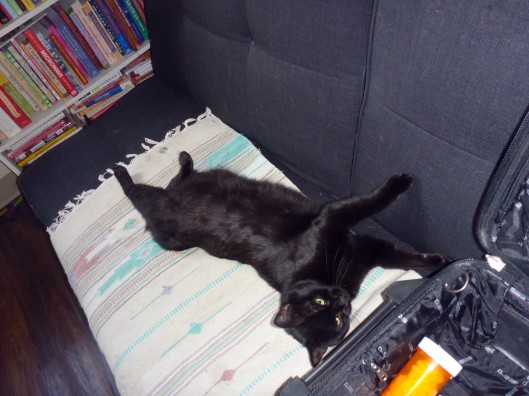 If I look cute, can I have a treat?

I am not taking my eyes off the treats. I am trying to act cool and relaxed.

My patience is wearing thin.