Olive tried to wake me up, but I kept slipping back into restless sleep. Then the lawn care folks went by my open windows with the gas weedwhacker and then lawn mowers. That woke me up! At first I thought the funny smell was from the outside machines….but it smelled more like plastic and some sort of chemical…not gas or oil.

I sat down to take my blood sugar. It was low, but not critically low. The smell was stronger and it was hard to breathe. I thought maybe I had accidentally left the living room fan on low overnight. I turned it towards me and saw the blade was going around about twice per minute, and sometimes not at all. The smell was coming from the fan’s motor. Dang it!

I tried banging on the fan, moving it around, turning the switch off and on. No such luck. It was dead 😦 I got the fan from the bedroom and put it next to my chair. After about an hour, my chest hurt all the way through and my ribs were sore from struggling to breathe. I moved the curtain out of the way in the bedroom, so that there was unobstructed airflow. On my way back out, I realized suddenly two of the salt lamps were dead. I wondered if there had been some sort of electrical surge? I put in new lightbulbs.

I sat back down in my chair, totally gasping for breath. I was about to cry. There was a knock on my door. I opened it to find a new fan! That was surreal!!!! Oh, wow! I love, love, love this fan! I can swivel it to direct airflow up or down. It’s way nicer than my cheapo box fan 🙂 Love at first sight….and even more love sitting here with the breeze blowing on me 🙂 There was nothing with the fan to say who sent it. Whoever you are, thank you a bazillion times over. I can breathe a heck of a lot better with a fan. 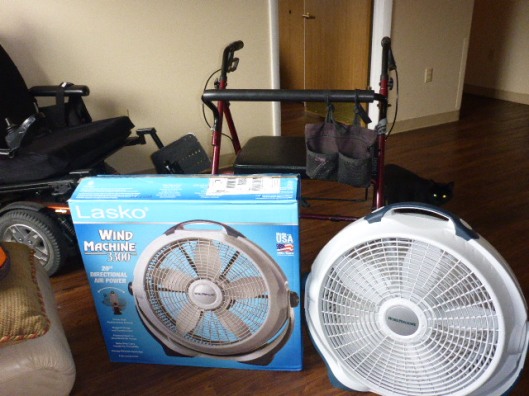 Notice who snuck in the pic? Olive says hi 🙂

I have a gastroenterologist doc appointment coming up this week. It’s in a place not well served by public transportation…..at least from here. I was about to call paratransit for a ride, so looked up the temperatures. It won’t be 80 degrees until 2 hours after I need picking up. Why does this keep happening?!?!?!?!? Weeks of 90’s and 100’s suddenly get “cold” as soon as I need paratransit. Argh!!!!!!! I HATE UTA’s paratransit! It couldn’t get much stupider than the way it’s run now.

Google maps says it’s a 13 minute drive from my place to the doc, or more than an hour each way by bus. It can take up to 4 buses to get there, depending on which route I pick. Shoot me now 😦

I got dressed and made a run out to the dumpster and recycling to get rid of the dead fan and recycle the box. A woman from yesterday’s concerned citizen group yelled for me to talk to her. She wanted to know if I had seen a doc or been to the hospital. Nope! I told her there really isn’t anything docs can do for me at this point. I’m old and worn out, with too many things wrong. She burst into tears! Turns out the paper-thin woman’s death is imminent and this woman is having a hard time dealing with it. I’m afraid I’m not very good at soothing. I said it’s a blessing to die when we get all full of diseases. It’s hard to imagine wanting to live with all systems failing. She only cried harder. I was saved by the bell. Her phone rang and I was able to escape.

But…..it was like jumping from the frying pan into the fire. My closest guy friends were all yakking by the mailboxes. I started out glad to see them and all cheerful. Then my left eyelid slammed shut. Then my voice got slurred and nasal and broken. Then I had wicked bad head pains. Then I got numb on my left side. My mouth would not move on that side. The guys were freaking out. I was, too, but I wasn’t going to let them know. When they were all talking, I quickly slipped away.

I don’t remember much for an hour or two. The left side of my face was so numb and immoveable that it was creepy. I gradually started being able to think and see and all that. Now most of my face works and has feeling again. These things are getting closer and closer together. Sigh…

My neck is now officially bigger than my face 😦 I love and hate steroids! My face is still stranger than I thought it was. This pic was taken around 8 PM. It was about 8 hours ago when I had the head pain and got numb. No wonder everyone keeps saying I look swollen 😮 So….was this another mini stroke? How many will happen before I get stuck that way?

I tried to be obedient. I went online and did some of the classes for my insulin pump. For now…in the beginning, it’s hard to imagine I will ever learn all I need to know! I will keep plugging away. I wanted to look up something about the pump and accidentally stumbled on the price!!! Oh. My. Gosh! And that’s just part of the system 😮  So far, they still need an iPhone to connect to. There have been notices for months that someone is developing a program to use with Android phones, but it hasn’t happened yet. I’m waiting to hear what my trainer has to say about needing a smartphone.

Oh….and speaking of expensive medical equipment, my new power chair is still a giant paperweight. No one has brought back the parts or talked to me about repair. My old chair is not doing well. Dang.

First my hands, then my arms, now my feet and legs. I want to know what happened to my skin? I have been putting lotion on all along, but last night I got those stupid lotion pockets under my skin on my feet and lower legs. Also, the rough, dry skin turned a very strange white between the sunburn and my toes. It looks like lotion that just needs rubbing in, but it’s not. I have had at least a half dozen cold showers since I put on lotion yesterday. I tried rubbing, then scraping the whiteness. The lotion is definitely one with my skin. I cannot be felt or moved. 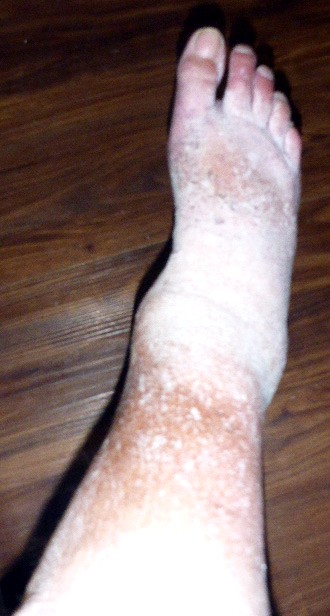 So…my skin likes to hoard pockets of lotion within my skin. Bizarre! 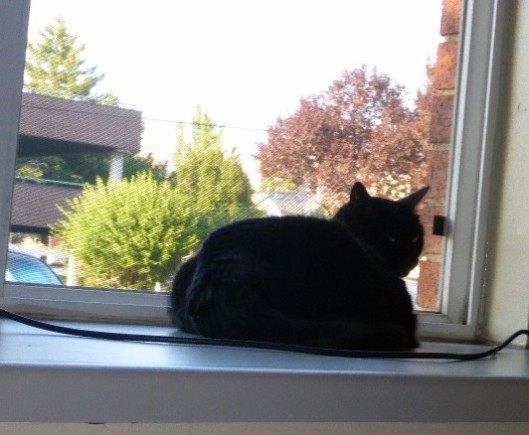 Olive usually gets miffed when the camera is pointed at her. Sorry….maybe 😛

5 thoughts on “A funny smell!”