Well, it was more of a nightmare than a dream. The dream seemed real…the kind where it’s hard to tell apart fiction and reality. I dreamed that my doctor came to see me and he said that signing me up for hospice was all a joke. I wasn’t really dying.

I then went over our conversations fast forward and slow motion. I clearly remembered what he had said….for an hour. Then a nurse started mocking me and said there was nothing wrong with me. I wanted to die of embarrassment. I finally got used to the fact that I would live to a ripe old age when the doc said….no, you really are going into hospice.

It totally seemed real. I’m still shaking. Waking up was even more confusing. It seemed like I was in several dimensions at once and was shifting around between possible outcomes to my story.

I panicked that I wasn’t dying. I didn’t want to keep going with so much wrong with me. I was stunned that people were playing with my emotions. I kept dreaming about a very mean nurse. She did everything she could to make me feel stupid and insignificant.

It took me a long time of being awake to clear my head. Slowly this world came into focus. Then I realized where the dream came from. The real Wendy had talked to a couple of different home health & hospice companies. I have an appointment in a few hours to do paperwork to get palliative care. That made it all very, very real.

I am soooooooo of two minds about all this. It was gorgeous Monday afternoon. I enjoyed being outside, watching people, thinking….but at the same time, I felt sick through and through. I was glad to be alive, but also looking forward to an end point to all the pain and struggles. I don’t have a death wish. It’s more like a philosophical Oh, well and a shrug.

When the nurse gets here this morning the whole palliative care/hospice thing goes from thoughts to real. Who wouldn’t feel conflicting emotions?

Well, she has been and gone. It was informative. What we decided is that I will do palliative care until Heather goes back to China, then switch to hospice. I will be getting a housekeeping aide twice a week, and also a personal care aide. But….she brought me a huge notebook to read. I guess I have a lot to learn. My emotions are all over the place. I have a lot of studying ahead. She is encouraging me to move to assisted living sooner rather than later. Yup. Overwhelming.

My voice worked while she was here. When the nurse left, I took out garbage and recycling. I got fall-out-of-the-chair weak, instantly after tossing the trash bag in. My voice got broken and I was soooooo confused! I was 2 blocks from my house when the nurse called with new info. She could understand nothing I said. Frustrating!

I had no clue where I was going, I just wanted to get away from the mold. I ended up going to the Smith’s near Liberty Park. I bought some sushi and ate it in the park. They had more powerful wasabi than TJ’s. It cleaned out my sinuses! But….I think food is just generally a bad idea 😦 I had to hurry home faster than ever 😮 No more eating away from home! Ugh. 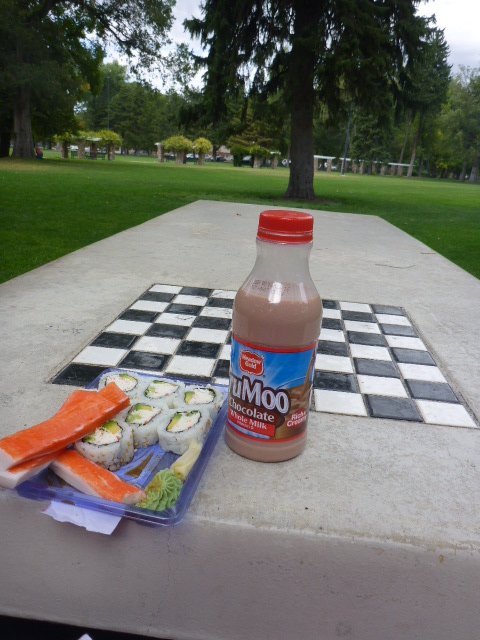 My neck has given up even trying to be a neck. Stupid steroid side effects!

I was afraid I had put in too many carbs in the pump’s bolus wizard. I didn’t. My blood sugar was up to 344!!! How did that happen? I am pretty sure there’s a new level of infection going on. Despite temps in the 60’s, I am bright red and burning up. Feeling sick, sick, sick. My head wants to explode. Everything hurts. Yuck. My MG has been getting worse each day. Sucks 😦

I want to live, but I also want to die and get it over with. I suppose no one reading this has gotten as far as needing hospice. Perhaps you know someone who has been there, done that? Lots to think about and lots of papers to sign. I think I have figured out why most people here start fighting hospice at the end. We are all used to directing our own lives and don’t like the feeling of giving power of decisions to anyone else. After 60 years of self-preservation, it seems weird to just stop taking meds and going to docs. That feels more like suicide than, as the nurse said, “slipping away” with the help of opiates. Sigh…..time for a blessing! I need guidance.

LATE NEWS!!!! I opened my door, and there was a huge box from Amazon. It was 12 boxes of Kleenex and a jar of kitty treats! Olive and I would like to thank Catherine. Wow! 🙂 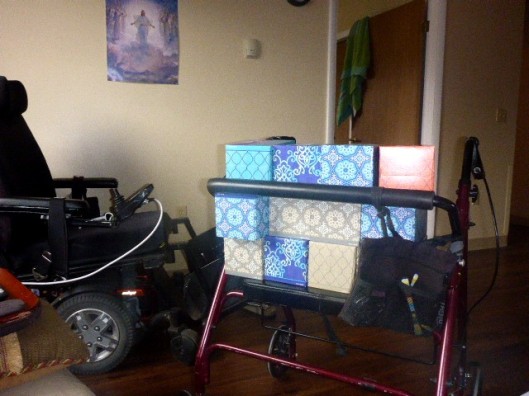