I only slept 3 hours and woke up choking and having a hard time breathing. I looked outside and it’s FINALLY snowing! It’s brighter outside at 3 AM than some days at 3 PM 🙂 I’m sitting up, with the blinds open, enjoying the snow. Olive is pretty interested, too. 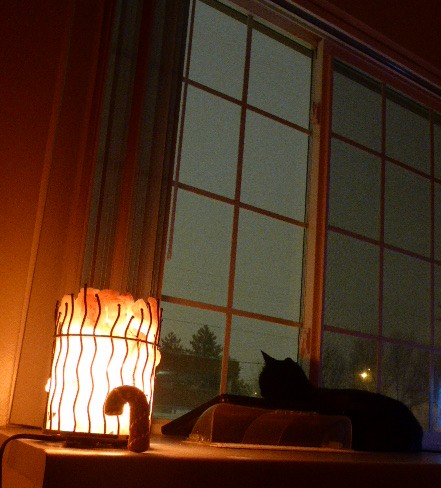 I didn’t feel well when I went to bed and I sure don’t feel well now. It’s a combo of MG, the tremoring/shaking/buzzing/vibrating and my heart is beating all wrong. A new thing is that my lungs hurt….a raw feeling inside. No Christmas reprieve, I guess. To try to fight back, I took my morning meds at 3 AM. I’m hoping I don’t have to sit up a whole lot longer and then when I wake up later in the morning, I will be stronger. 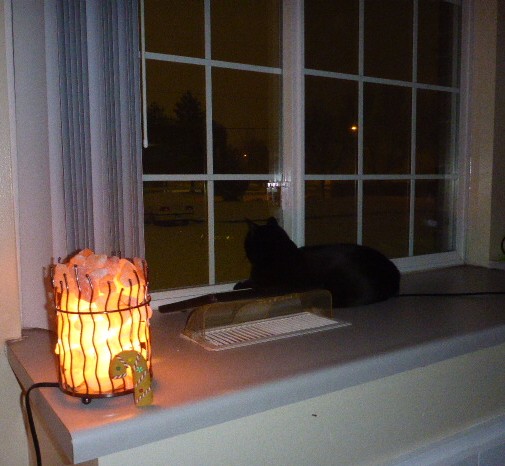 Ack! That didn’t work. I guess I have just been having too much fun….and it wore me down. I woke up around 8 AM and had a heck of a time showering. It was another one of those days that I was too weak to shampoo very well. I always frustrate myself. How many bazillion times have I lifted my arms to fix my collar or shampoo my hair only to discover that I can’t? Theoretically, I should just be calm and try something else. Instead I invariably panic. I think part of the panic is because when my arms don’t work….neither do my lungs. MG weakness washes over me.

I wish I could think of a way to really explain the feeling. It’s a lot more than plain old weakness. I get rubbery, my arms feel fatter. There’s the sensation like I just did a dozen push-ups…stinging, weak muscles…but something that I immediately know of as only MG. It’s scary when body parts don’t obey. I was too weak to put on clothes after my shower, so just slipped on my nightgown….which was hard enough!

Usually if I rest long enough and sit in front of the fan long enough…I get stronger. Not today! 😮 I suppose the panic didn’t help at all. I knew I needed to be dressed and ready to go at 11 for Christmas dinner. The more I stressed out about being so weak…the weaker I got. I tried distracting my brain, but nothing helped. Then like snapping a finger at 10:55, I felt strength surge through me. It took a whole hour for the Mestinon to kick in, instead of the usual 20 minutes.

Since I was going out to a fancy steak house, I felt the need to actually wear a bra. OMG! It’s hard to get one on under ideal conditions. This is a slip-on sports bra. I panicked even more when I got the darn thing stuck half way on me. I was sitting on my bed and it was like tangling with an octopus. Somehow I finally got my arms and boobs all in the right places. I swore I would never put the bra on again after last time! I never learn. The rest of my clothes were easier to get on. I sat there greedily sucking air for a few minutes.

I had sent Heather an email that I was going to need help putting my bra and boots on. Good thing I got my clothes on by myself! She didn’t get the message and Luke came in to help me 😛 All he had to do was put on my boots 🙂 Some idiot had parked their car partially blocking the wheelchair curb cut near the front door. Heather was shoveling snow and slush so I could get in their car. Then she had to lift my foot up so I could get in.

My church was cancelled today because of the snow. As I was getting in Heather’s car, a dressed up woman who discovered there was no church, was trying to get back to the front door, around the little car blocking the way. I guess she had some choice words about it 😛 When Heather had been shoveling the path for me, she threw a few towards the offending car. Snicker…

The roads were a mess. Some were plowed, some not and some must have been part way plowed. Vehicles were stuck here and there. We watched a front wheel drive car plow into a snow bank, with the car’s nose in the air and front tires spinning. Bummer! It was less than a mile from here to the steak house, so we were OK. 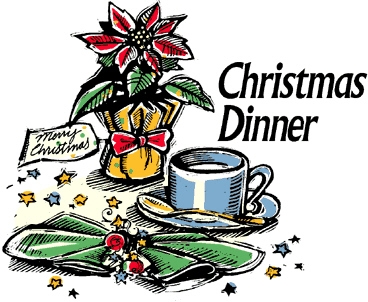 I had Seared Scallops, Lobster Risotto, Roasted Beets, Balsamic Glaze, Lemon Zest, Grilled Asparagus and a bite of Heather’s appetizer scallop wrapped in really good bacon. As is always the case with me, everybody else had finished eating when I was only half way through. I’m surprised I did that well! In the middle of the night; this morning and the first few swallows at the restaurant, MG had wrecked my ability to swallow. Thank goodness I am usually able to remain solidly calm when that happens. I feel like a boa constrictor looks when they slowly swallow something impossibly big. I let it inch down oh, so slowly and remain incredibly calm….even though I really want to panic! I hate MG!!!!!

While we were eating, my voice had come back and my eye was only partly drooped and I mostly swallowed correctly. When I went to stand up, I remembered….DUH!….I was still really weak. My foot would drop on the floor and drag. I was quivering like crazy. Thank goodness it was cold outside! That helped me gain a bit of strength. Heather had to lift my leg in the car and buckle me up….but I was still moveable 😛

We get back to my apartment and the offending car was still blocking the way. Heather was again shoveling a path for me to get in. Every few shovels full, she would “accidentally” fling a shovel full on the car. Some people who live here started giggling when the saw what she was doing. I thought it was a grouchy guy’s car….the guy who threw my parking cone in the dumpster the first winter I lived here. Ooops! Nope. It was the maintenance man’s car. Just before lunch, we had almost no water pressure. He must have come here for that. Heather popped her head into the office to complain about the car only to find out it was his. He said he didn’t want to walk through the snow….so left it there.

Heather’s husband’s father drove up here from Texas. He was with us for lunch. After lunch they went to the movies with the 2 older boys while Desmond, Heather and I hung out here. Almost as soon as Heather left, a fire tuck and ambulance pulled up to the door. I hope the stupid little car was gone by then! The ambulance was here for quite a while before taking someone away. I’m glad it wasn’t me! It felt like I was headed for MG crisis, but so far, so good. 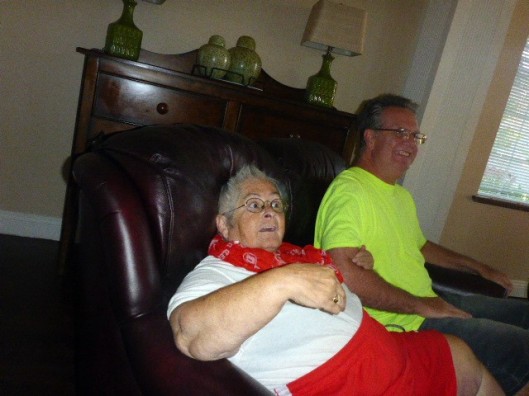 This is Diane, sitting with Kent, the guy who is going to adopt Olive. He is the one who just came and told me the news 😦 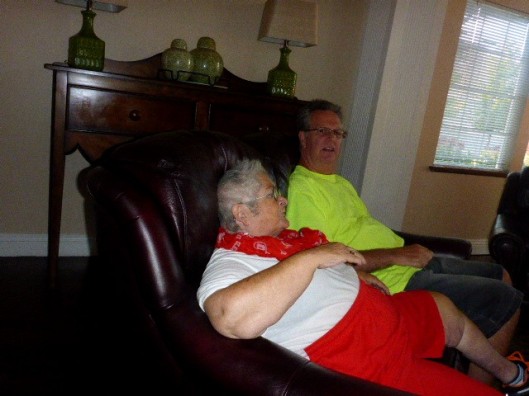 Ummmm….oh, crap! The ambulance had no one in it. The reason they were here so long is because somebody died 😦 It was Diane. I really liked her. She was at Bingo Friday night and tonight someone went in to see where she was…..only to find her dead 😦 She used those arm crutch things to walk and was waiting for a power wheelchair like mine….from the same stupid company. I keep thinking I will be dead before they repair my new chair. I have no idea why I keep being alive while people who seem better off don’t make it. Too mean to die, I guess. 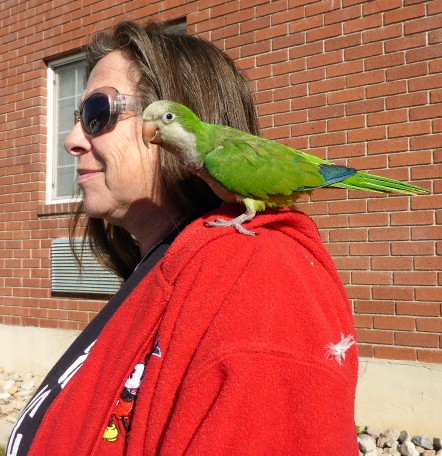 This woman’s significant other is the RA just for Christmas. Must be she got sent to check on Diane. She went in and shook her, only to find Diane dead. That must be an awful feeling 😦

It’s supposed to stop snowing tonight. The TV news said we got 8 inches of snow so far and the record for Christmas day is 9″. I’m looking forward to the predicted sun this week 🙂 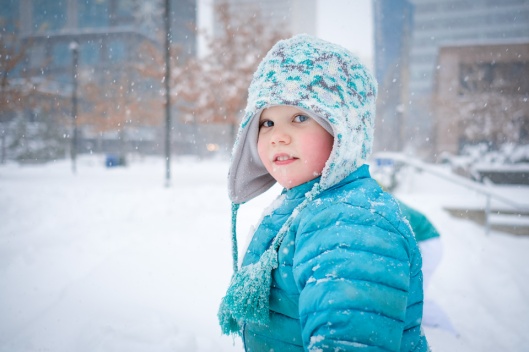